Burmese refugees began making Arizona their new home in 2001. The arrival of Burmese refugees reached their peak in 2009 when 908 were resettled in the state. While the number arriving each year has dropped off significantly (only 174 new Burmese refugees arrived in 2012), Arizona can boast about its significant and vibrant Burmese refugee community. In total, since 2001, Arizonans have welcomed 3,808 Burmese refugees into our communities. In terms of total number resettled, the Burmese population ranks sixth behind Vietnam (1), Iraq (2), Bosnia (3), Cuba (4), and Somalia (5).

In honor of Burmese culture, here is a Burmese recipe. If you try it out, tell us about your experience. Also, if you have a favorite ethnic recipe to share, send us a message! We love highlighting the stories of our volunteers. 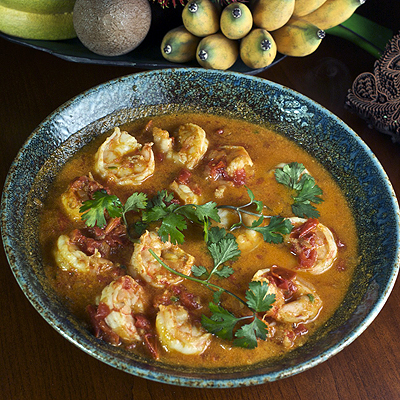 Rinse the shrimp and set aside. (I boil the shells in water, strain and reserve the water and use this in place of the water called for in the recipe.) With a mortar, pound the minced shallots and garlic to a paste.

Heat the oil in a wok or a wide heavy skillet over medium-high heat. Add the turmeric and stir, then toss in the shallot and garlic paste. Lower the heat to medium, and cook, stirring frequently, about two minutes until softened but not browned. Add the tomatoes and cook for several minutes at a medium boil, stirring occasionally, until the tomatoes are well softened and the oil has risen to the surface.

Add the water and fish sauce, bring back to a medium boil, and add the shrimp. Cook just until the shrimp start to turn pink, then toss in the minced chiles, stir briefly, and remove from the heat. Taste and adjust the seasoning if necessary.

Turn out into a bowl, top with the cilantro leaves, if using (and they certainly add to the dish), and put out lime wedges if you wish. Serve hot or at room temperature.